A quickie post to show you what the orphans would like look with all the rows reversed. It's good to try this out, but don't care for this. Now it seems really bottom heavy and boring. 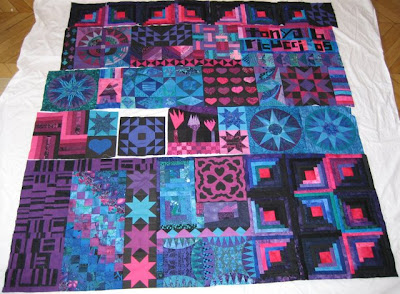 I've just finished the book Design! A Lively Guide to Design Basics for Artists and Craftspeople by Steven Aimone. I thoroughly enjoyed it. Full of beautiful pictures. You can read a well-written review of the book here. I've been trying to incorporate some of what I learned from the book. "A design with most of its major forces at the top feels active and dynamic, while a design with activity clustered near the bottom feels relatively stable and grounded." Stable and grounded? Boring. I'd rather err on the side of dynamism.

A close up for Cheri: 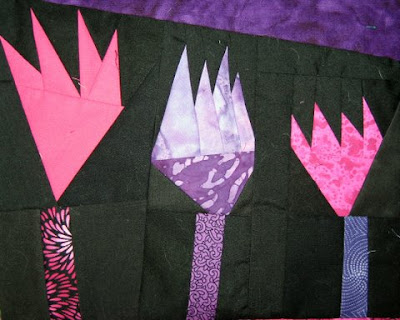 These were meant to be tulips, back when I was making All You Need is Love. I free-pieced houses and star and these flowers, none of which I ended up using in that quilt. These do rather look like forks tho, don't they.

Shoot, I just went back and actually looked at those photo of how I had the blocks layed out in 2005. Boy, there are things I like about it a lot better than what I have now. Agh. Must ignore the doubts and forge ahead. I've already got a lot of this sewn and I'm NOT taking it apart.

By the way, the only French I spoke yesterday was "hello, do you speak English?" I can't spell that in French so translating it here for you. That was intimidating enough. If I'd had to continue the conversation in French I'd have been lost because I still can't even do the numbers properly. I'm pathetic, but that's why we get referalls to doctors etc who speak English. The American Hospital in Paris, which is out in the suburbs, has a staff full of English speakers - that's where I'm going to the endocrinologist.

I wasn't going to make this a long post, but here I'm babbling away. One last note. Maria asked if I enjoy Battlestar Galactica. Hmmm, no. Don't know if it's because I'm still hung up on Dirk Benedict and Richard Hatch (the real one, not that naked impostor Survivor guy) from the original series or I just don't like my sci-fi this serious and dark. I'll give the show another chance some day.
Posted by Tonya Ricucci at 4:41 AM

If they are forks they are very cute pretty forks.

These design issues are what can paralyze me for months at a time. And then nothing gets done. Try not to obsess too much--that's my downfall. I thought the version you had yesterday looked terrific. Great colors!

And French numbering... Store salespeople would tell me prices of things and I would just stare at them like an idiot as I tried to process it in my head. The cogs were turning very slowly. LOL

You're absolutely right -- the rows reversed does feel boring. I never would have thought it would make such a dramatic shift, but ugh... Your layout from yesterday witht he log cabin on the bottom to balance it was much more dynamic :-)

Maybe you can learn francais by making a wonky word quilt in french?....

That, asking where to buy a ticket for the train, and counting are all I remember from 4 tears of French! Well maybe a bit more. Pathetic.

Tonya, do you think it seems "heavy" on the bottom due to the amount of black that comes together in the right hand log cabin corner? If the log cabin section was restructured, would it add more movement to that corner?

As for the French language - to be honest I could never catch the amount they were asking for in a shop - I always just handed over the largest denomination note I had and meekly accepted the change. Lots of the little shops did have a till with a display on the top so I could get a bit of a clue from that :o)

Oh, thanks for the tulip/fork picture! I'm sure most people probably recognized them as tulips, but I saw these very eager forks (almost like people forks) sitting at a checkered tablecloth. Please realize that I work in recipe development and I love to eat and I'm preparing for a trip to Italy this summer, so I think my reaction tells you more about me than your block. And great art always becomes personal and is open to multiple interpretations! (I say all this with a very red face.)

Thanks for playing around with the layout. It's so much fun to see different possibilities. Too bad it can't be posted as movable tiles!

YOu know, once you quilt it though it will be spectacular.

when we lived in Germany many years ago, my husband used to call my purse of German coins, "Norma's funny money". He got great joy out of the fact that I, the person who watched every penny we had, had no idea what I was paying for something I bought! If I wanted it and I had enough coins, I just handed them over, then asked him what I paid for it when we got home. More than once I was pretty shocked!

I agree that once you put it together and quilt it, you will be happy. On chance that you aren't however.............I will send my snail mail and you can send it to me. How much do you think that would cost in French funny money? LOL

I think that you'll like it and the bottom won't seem so heavy once it's quilted through.

Hey Ton, well, surprise, surprise! Look what emerged from the Shadowlands...LOL Not that I have a single leg to stand on, most of my endeavors reside in the shadows of 'Unfinish'.
I sure can't say what to do, that has to come totally from you....but..as I remember you were toying with taking apart a quilted quilt to see if you could use just the part you liked??? And rather recently, as I recall...*VBG* Maybe a tat of unstitching wouldn't be sooooo bad. The combo of log cabin squares with black is a pretty heavy impact section, where ever it fits.
Go back and look at the one that orphan Sio had last week...I got the impression the blocks were put where-ever they fit together the best. It's still a creation of something new from something that isn't totally flexible, you know. OK..I'll shut up. Hugs, Finn

I agree with you Tonya, the way you had the quilt arranged in the previous post was more dynamic.

You're making me rethink the arrangement of a set of Friendship blocks I currently have on a sheet...

Ok -- this is just a side note as the blocks are lovely, the layout you choose will be fantastic, and the French thing can be a bit intimidating.

BUT -- on to serious matters. Did you know that Richard Hatch is on the new Battlestar Galactica? Older -- and yet, still something. And yep, I have to agree with you about the originals -- but there is something about the new series. But you really have to look at it as a totally new re-interpretation.

Hmm.. good to know that good info about active and dynamic versus stable and grounded. Love the tulips.