I forced myself out of the apartment this morning. It is far too easy for me to be a hermit. I visited the Louvre, but probably shouldn't have. The poor labeling and signposting just irritated the heck out of me today. Cost for my trips to the Louvre: $51 each.

I will spare you my lousy photos of the Venus de Milo and Winged Victory of Samothrace. I already deleted them.

According to the Wikipedia, a "Sphinx is an image of a recumbent lion with the head of a ram, of a falcon or of a person, invented by the Egyptians of the Old Kingdom, but a cultural import in Greek mythology." The classical Greek sphinx has wings and the head of a woman. Why am I telling you this? Because I was geeky enough to come home and start looking through online bestiaries trying to name these chicks: 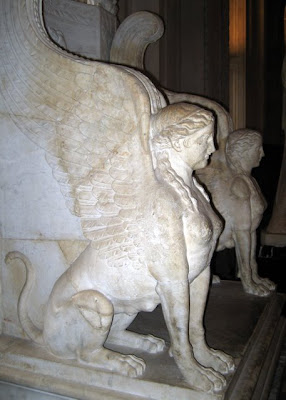 This is a chair from the Vatican that is on display at the Louvre. 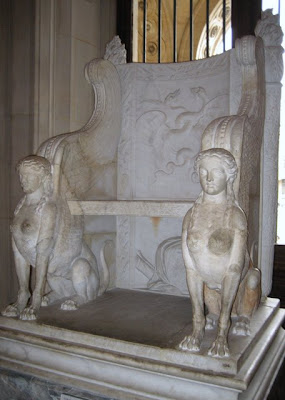 And a picture of my Mad Eye Lily. That's her nickname (one of them) because she often sleeps with one eye partially open. creepy. And no, she wasn't sleeping when I took this photo. 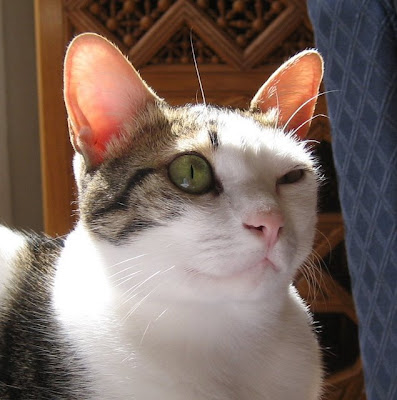 Beautiful photos! I love Mad Eye Lily, I am trying to imagine her sleeping like that!

Very intersting statuary -- not really shinx then, but what? It looks like they are very nurturing having both the woman's breasts and the lion's teats...

fabulous images to add to my collection of lion research. thks!

How interesting your pics are! It seems very expensive to visit the Louvre?

Love that pic of Mad Eye Lily.
The more of cats I see on the blogs, the more I want another.

Thanks for all the photos - can you believe I've lived in London for 14 years now, and still have never been to Paris? Pathetic, really.

Tonya, Can you give us any history on that beautiful chair. How old is it? Was there a guild or specific person that did the carving?
www.GypsyQuilterDesigns@yahoo.com

Mad Eye Lily should be a pirate's cat!! :D She sure looks lovable though and that is what matters!

I love your pictures around Paris. It's a city I hope to visit one day!

That is the most HILARIOUS picture of your cat....I normally think that your kitties just look so classy and beautiful....but this one is so funny. Thanks!!
JMB

Thank you for all your stories and pictures. And I love your tutorials. I am a beginning quilter and they have been very inspirational and helpful. Have a nice weekend, Kieny.

There must be some book that tells what everything in the Louvre is, though that would cut down on the fun of figuring it out the hard way.

That cat photo is priceless!

A few more trips and that pass will have been more than worth it! I know the signage is annoying but the things you can see. Of course, I'm geeky enough that I love museum displays, but I always wonder what they have hidden in the back. I wonder what it would be like to be able to prowl around the "good stuff".

Glad you're getting out and about. You'll just have to walk to the Louvre :D

I'm really enjoying your photos of Paris. The Louvre used to be free one day a week, I think Tuesdays. Lots of people but such a huge building is never really crowded,except around the Mona Lisa.

I think I owuld have tried to follow a tour guide around my first time to get a feel for what was there, and then go back and examine everything peacefully at my leisure. When I went to Paris, I spent a day at the Louvre. I don't remember the sphinx but of course I was there a few (okay twenty) years ago.
The sphinx is interesting.

I'm enjoying your pictures of the statues, so beautifully done. And Lily is a treasure! Too too cute.