I wasn't paying enough attention to my quilting and moved over to start the new set of fans too soon. I didn't realize until I'd already done the first three arcs of the new batch and there was no way I was going back, so I just kept working as usual and imbedded the short stack. 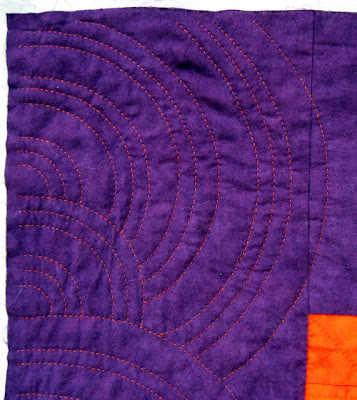 I'm halfway done quilting the border and a lot farther than half in quilting the whole thing. I just love quilting here - there is so much natural light coming in the windows. Yesterday I did go out and buy a little Ott light so now I can quilt at night as well.

I'm rather boring since that's my big news. All I've been doing is quilting in front of the boob tube. Just started the third season of The Wire, which is pretty intense as usual. From watching this (and Homicide - which I never have) you would think that Baltimore is just one giant crime zone. I guess the same could be true of New York City what with all the Law and Orders and CSI, but you don't get the same sense of despair from those shows.

And on that cheery note, I am out of here. Ya'all take care.
Posted by Tonya Ricucci at 2:57 PM

I LIke it! It's not a mistake, it's a Design Detail.

His Office, My Studio said...

I agree with Kathie, it is a design.

My husband and I love the Wire. Last year when hubby lost his job we cancelled cable and no more Wire. We are watching it now in reruns. It is one of the most instense tv shows I have ever watched. If an when we get extra cash I want to get the seasons on DVD.

Hi Tonya. You don't know me but I am friends with Carol E. I have been studying your handquilting as I am teaching my self. I am trying your free hand fans on a halloween panel. My stitches are not as close to yours but it is a start.

looks wonderful, as usual! ANd the pics of your cats with the fabric are very cute, they look like very well-behaved kitties.

Stoopid question coming up. Are you doing the fans in batches of 3? Current project has hit the deck and I'm thinking of doing another family quilt for Fav Aunt's 80th in May. Thought of doing fans x 3 instead of fans x 7. Waddyafink?

Forgot to say - wish I could hand quilt like that!

I still love it, in fact I love the little short stack!

Hey Ton, I vote for 'design detail'..a hidden treasure and surprise..bound to bring a smile to someone..*VBS*

Sorry to read about the allergies, but happy there are MEDS for them..mine hang tough all witner long as well as summer. Itchy eyes, just what I need!! Hugs, Finn

Looks great to me. That is basically my philosophy in quilting - there are no mistakes that cannot be turned into something positive.

There's a mistake? Who told you? The Quilt Police? LOL! Your quilting never ceases to amaze me.

I would love to have several days to just sit in front of the TV and quilt. Enjoy your time. Before you know it you'll be on your way to Paris.

Oh Tonya, you are the perfect handquilter. Your stitches look machine made if I didn't know better and that's a compliment! I have an Ott light I am inseparable with. Don't know how I lived without it for so long.

You know, you're stitches are so close together I swore they were by machine!

Hey, how are you feeling? Much better I hope!