Today I'm posting some pics from my very talented friend Rachael, who remains determinedly blogless. I've posted three of these before, but that was almost two years ago. Back in 2003, Rachael saw me working on a crusty at guild so I showed her the basics (and the tutorial by Susan Shie) and she was off and running.

This first one shows the star-crossed love between a witch and vampire, with the lyrics of That Old Black Magic running in the background. I absolutely LOVE the faces Rachael makes - they have so much character. 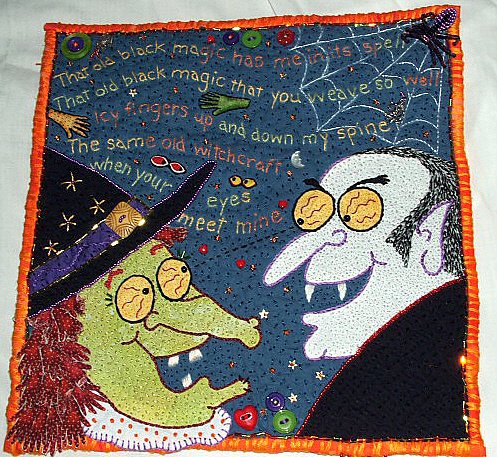 This devil is creepier. The stitching is fabulous: 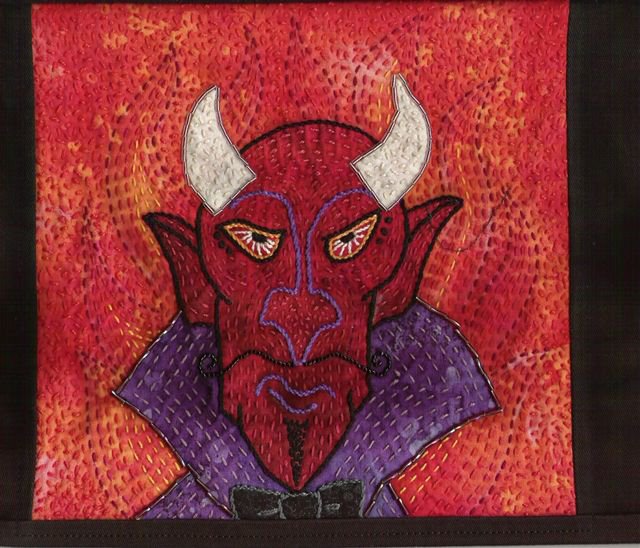 A Merry Hallowe'en to you: 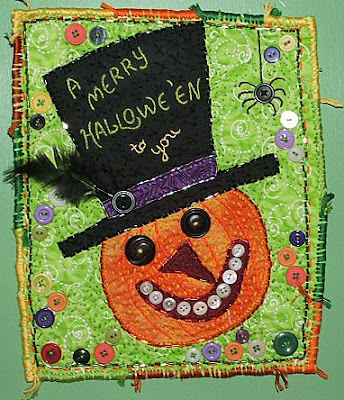 I love That Old Black Magic, I do, but I think this one is my favorite. Happy Boo Day: 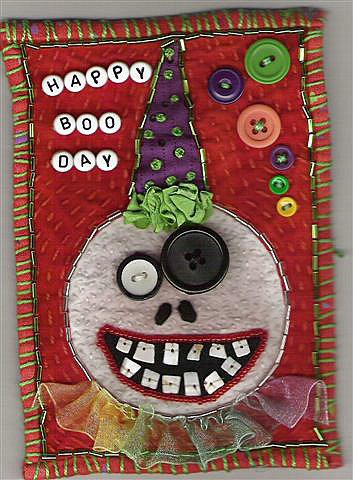 Clowns ARE scary. I love the teeth - Rachael broke up an old piece of jewelry to get the beads.
I have been in a funk lately. Just unable to focus or work on anything. I did a few minutes on three different projects yesterday and of course got nothing much accomplished. Yesterday was rain rain rain and I was so cold. And whiny.
Today has been much better. I got a new Feel Bright Light visor that is supposed to help with the depression that comes with SAD (Seasonal Affective Disorder, which I definitely have). Very weird shooting blue light into my eyes.
So today I started with bright light, plus we've had peeks of sunshine and not had rain. My sweetie and I took a metro ride out to a mall in the 'burbs to buy a space heater. Darty (the closest equivalent I can think of is Best Buy) had an array of them on display, but when my husband approached a salesperson he was told they are not selling them now. What???? At least today is warmer and the radiators will be turned on soon(ish).
While we were at the hypermarche I meant to look and see if I could find any kale, collard or swiss chard. I have been unable to find any near me at the street market, supermarket or the frozen food store. All that is available is many varieties of lettuce, spinach, cabbage, and even bok choy. No dark leafy greens for soup. Do the french not eat them?
Your Halloween link for the day: Kathy York's marvelous quilt Martha's Pumpkin Men.
Posted by Tonya Ricucci at 10:07 AM

Rachael's work is fabulous!! I love that creepy devil, and also enjoying looking at her use of buttons and the clever teeth in that clown. Thanks for sharing her work, even if she refuses to. (Tell her we won't bite.)

These are marvelous! Thank you so much for sharing, Tonya. I hope the light helps and that you get some heat soon! We just got our heat going and had a fire last night which was so cozy. Thanks for the link to Martha's Pumpkin Men, it's really fabulous!

Thank you for being so generous as to feature a friend's work. The Halloween quilts are wonderful and scarey in a fun kind of way! The fact that the teeth on the clown are actually from a necklace reminds me of a lovely mother of pearl bracelet I bought and wore to school, only to have one little boy look at it in trepidation, and say, 'Are those real teeth?' I haven't worn it since, so maybe it could become teeth after all!

That clown is the creepiest, but in such a funny way, like Tim Burton's "Nightmare Before Christmas." Thanks for sharing your friend's fabulous work.

I'm having issues with a funk of my own :-P I don't think mine is SAD yet. More like PMS. Hope the visor helps.

Those are wonderful pieces. Thanks for showing us Tanya. Hope they will turn on the heat soon.

They are all so terrific, I don't think I could choose a favorite! Thank you for sharing them with us and hopefully she will change her mind about getting a blog of her own.

Rachael's work looks such fun! She is very clever.

I'm so sorry you're so cold. Nothing more miserable. I turned on the heat here for the first time today. It's pouring and very dreary, and I have to go walk the dog. I hope your light helps your SAD.

I love those crusties!!! I think I'll have to start a little one for my upcoming trip. And Kathy York's quilt...where do I begin. Just wow.

And remember, you're cold and damp in PARIS not EekumSqueekum North Dakota (no offense, N.D.)

Oh, that demon with the lines in his eyes is fabulous. I do like the clown teeth too though. It's great to have talented friends, because they keep us on our toes, right??!!

I love the stitching on that devil it reminds me of Kantha. I'm so sorry you're feeling so cold and glum - I can't imagine not being able to control my own heating - like going to work and the employers saying they won't switch on the heating until a certain date. As for the vegetables I can remember thinking that French supermarkets seemed to sell a wide variety of fruit but the only blessed thing I could ever find in the veg section was ENDIVE - yeuch!! and those massive heads of what looked like lettuce but tasted so bitter - they could have been chicory - again yeuch!!! everything else seemed to be tinned or bottled and the frozen veg was so disgusting we used to import English frozen peas when Nigel had a trip back to the UK - Red Cross Parcels!!!

I love Tha tOld Black Magic and, yes, clowns are scary. I can remember being scared stiff when I was little.

Swiss Chard - mais oui bien sûr. It's just beginning to come into the hypermarchés down here so should be with you soon. I'm a Swiss Chard freak - wish the rest of the family was. One thing you will be able to get is Savoy Cabbage in lorry loads. I love it - again the family doesn't.

I can't believe Darty said that! Try But or the hypermarchés - cheaper too.

oh...a visor for SAD...very interesting-good luck with getting a space heater-I cranked our furnace up for the same reason-I hate being cold. try wearing bright colors-or at least working with them-I have found the bright lights and the bright fabrics help fight that funk-as I too suffer from SAD. uggs for the feet too-toasty feet really help!