A Day in Paris with Salad and Chocolate

Remember when I explained to you the incredible tuna and melon salad I had at my favorite restaurant? It had feta, tuna, grilled vegetables and cantelope. Well if I thought cantelope was a surprise, I was completely unprepared for watermelon: 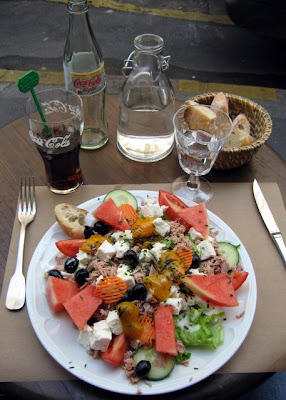 I shouldn't have been surprised, it was delicious. I finally decided I've been going to the restaurant often enough they know I'm not a tourist. So I whipped out the camera and got a pic for you. Doesn't that look yummy? Well, if you like tuna.

During my walk, I caught sight of someone moving into their apartment, so I leapt into action with my trusty camera. The lifter thing is attached to the back of the little truck. 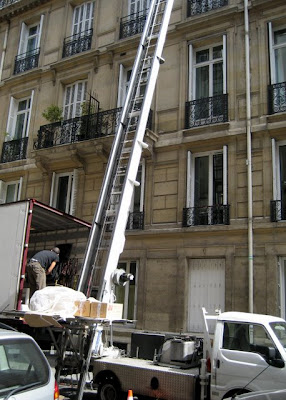 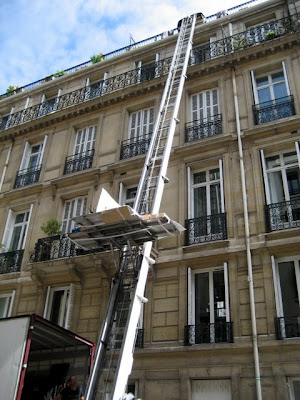 Do they have these lifter trucks in other big cities? I'd never seen one before, but the big apartment buildings I've lived in in the states have had regular sized elevators, if not freight elevators (not to mention the windows don't open up big enough to let much in). Elevators here are usually retrofitted in somewhere small. The one in our building can take two people who are friendly, and that's it.

La rentree (rhymes with entree) was on Tuesday, the start of the new year. Or should I say the restart? Every one is back from their holidays. Our street has certainly gotten much busier and the honking is back. Almost all the shops are open too, most especially our favorite bakery. 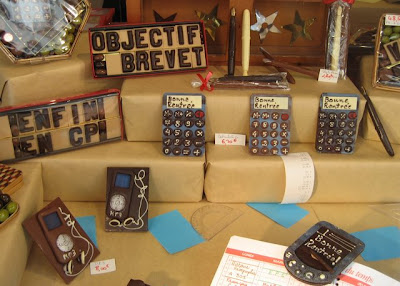 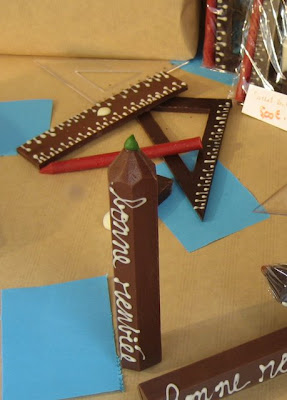 The shop smelled sooo amazing. I succumbed to a half log of Dark Chocolate with Orange. I'm not going to show you a picture because it's not very attractive and kinda looks like something else, but boy did it taste good. And of course I gobbled the whole thing down as soon as I got home, although I did try to rewrap it and put it away. I managed to walk into the living room and then I had to go back and eat the rest of it. I am a glutton, a gourmande in the french sense of the word.

I tried out the first disc of Dexter, a Showtime series about a serial killer who only kills serial killers. Kind of a stupid choice for someone who refuses to read the bits in books from the killer or victim point of view and only reads the detectives' parts. But I'd heard good things about it, so thought it was worth a try. Mmm, had it's intriguing bits, but not sure I need to see any more.

I did quilt while I was watching, so it was good for that. I'm busily outlining each of the flowers and stems in Blooming Horrors with regular quilting thread.

Posted by Tonya Ricucci at 2:45 AM

Tonya I have a piece of black spotty very similar to the one in your last post that Pokey has her bottom on - I bought three yards so would happily cut off a chunk and send it to you if you tell me how much you need - email me with the length you need when I cut straight across the width of the fabric and your snail mail address and I'll pop it in the post to you - if it's not quite suitable I'm sure you'll find another use for it somewhere, some place :o)

I've only ever seen the lift things in France. I've seen them in Angouleme, Perigueux and Bordeaux - never in London which surprises me.

Rentrée in chocolat - yum! Do you know what the words mean. Objectif Brevet is for the 3°. The Brevet is the exam they take in their last year at college. Bit like the English GCSE or O Level as it was in my day.

CP is the first year of Primary school. Kids find that more daunting that going up to college from primary.

Both are trés important!

The French certainly know food!! Love the chocolate back to school display - makes me want to rent Chocolat again!

I'm glad I had dinner - your post is making my mouth water!
*hugs*
Tazzie
:-)

RE: Dexter...I read the first book & although I enjoy murder mysteries, etc., Dexter was a bit too far fetched for me.
Cathi in Texas

I've seen these lifts, not for moving but for roofing jobs to haul bundles of shingles up onto the roof. I can't resist chocolate and once opened, considered it all eaten in one go.

Love the chocolat, and it's so cool to see that French candy shops go equally nuts at all times of year. My time in Paris in the mid 90s was shortly before Easter and the chocolate shop windows were plenty crazy. I have pictures somewhere...

Now that is my kind of back to school pic. Humm. Love that chocolate.

The salad looks very delicious (and huge!). Love the chocolate but I wouldn't want to eat it and destroy the art.

I saw the Dexter series and I would say that I don't think it's your type of show. It made me uncomfortable and I didn't think it was all that great.

Let me loose in that chocolate store!

I love your Creature Comforts quilt. It's so you.

That chocolate looks scrumptious! I'm a chocolate person. In fact, I think I'll go to the fridge right now and have me some chocolate icecream :)

I am glad you didn't show that one picture. Watermelon has become a surprise to me in the last several years. Try watermelon with red onions and feta for a very refreshing salad. You sprinkle a bit of really good olive oil and salt and pepper and voila!

Hmmn...chocolate, salad, Paris -- um, sounds about perfect to me! Love the progress on the Halloween quilt so far!

I have to agree the black works on the bottom -- but which one? I have a fondness for the "dinasaur" fabric -- I've used it myself.

I just finished the first Huston book -- not bad. I think my hubby liked it more than I did, but I'm ordering the next one from interloans and I'll see how I feel about Joe after that!

If the chocolate in the window looks that good, I can only imagine how wonderful a fresh chocolate cake would be. Let us know will you?

Oh, I used to love to look in the windows of the bakeries in Europe. In Amsterdam, they have pulleys at the tops of the buildings, and goods are moved into the apartments by hauling them up the side of the building with the pulley and moved through wide windows.

(By the way, "Lamb" is definitely Christopher Moore's best book to date.)

Oh Tonya - you have the most amazing color sense! I am jealous. Thanks for ALL the photos, but especially of that wild Creature Comforts quilt. The lettering is, as per your style, just wonderful!

I just had to laugh out loud... I'm the same way with chocolate! Why do we bother to even try to go into the next room? I always turn around and finish it off.

Unknown said...
This comment has been removed by a blog administrator.
5:17 AM