Even the most mundane objects in Paris, such as streetlamps, can be absolutely gorgeous. This streetlamp is on a bridge over the Seine. Different faces of a sea king, with shells in his beard: 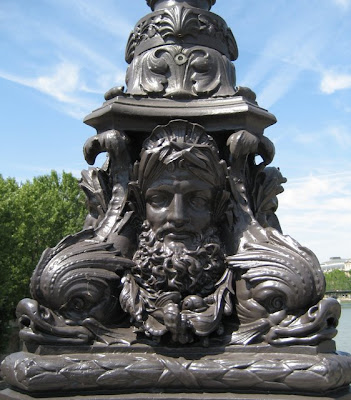 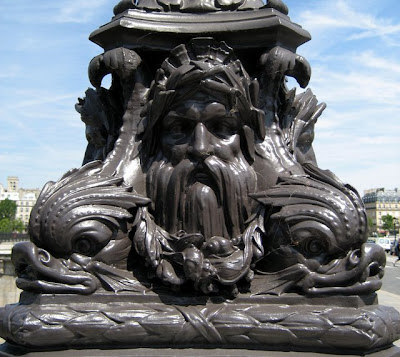 I took those photos a couple of weeks ago, back during a glorious day of sunshine. We've had so much rain since then it's hard to remember. The sun is back out again and I'm torn between wanting to take a walk and see some sights and doing some sewing, which I've been neglecting for ages.

I am, however, almost finished with the applique on my current project. I've done all the flowers now and some of the leaves. This is a picture of the underneath. I cut away the backing fabric because I can't stand to waste big chunks of fabric AND I hate hand quilting through any extra layer. I didn't cut any sewing machine seams though - I'm not sure what that would do, but I expect it wouldn't be good. 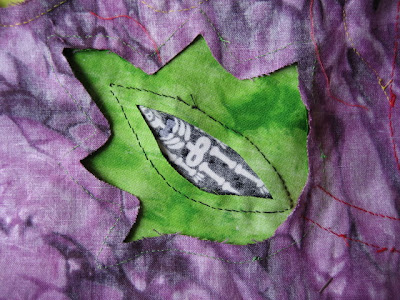 Thank you all for being so supportive about a class. I'm refining my idea so that it's workable and both experienced and beginning quilters can participate. I have decided to focus on free-piecing though - not applique.
Now when I say beginning though, I don't mean this would be your very first project and you've never used a sewing machine. No, that would be too hard on all of us. You need to have an idea of how quilts are constructed, can use a rotary cutter, sew a straight seam, and press blocks flat without stretching them way out of shape. The best way to know if you are ready for the class is to take a look at my letters tutorial on Quiltville. If that's overwhelming, then maybe this class won't be for you. If you think, "hey, I can do that and if my initial experiments don't turn out but I'll keep working at it," then you'd do great. Yes, I'll be available to answer questions and do my utmost to help, but we're still going to be constrained by the fact that I'm here and you're there.
Posted by Tonya Ricucci at 4:01 AM

Having trouble sending mail again. We are lucky as it probably was a tornado. They are very capricious however and hit one house and not another. Lot of damage around here mostly trees and power lines. Ohio and Chicago are having more trouble than we are but ours is bad enough.

And how are you?

Hard to believe that is a streetlamp.

great pictures again Tonya!
a class would be lots of fun! I hope some day to be walking around Paris too..very inspirational, how do you save your pictures on your computer/categories????
can't wait to see what you come up.
Kathie

The skulls in his beard are wonderful! My vote would have been walk around and explore a bit and come home and sew! (best of both worlds -- can you tell I'm not much into delayed gratification?)

Your class idea sounds great! A wonderful way to share your experience!

Great photos of some of the lovely Paris sculptures. I won't have time to participate in a class but I do think it's a wonderful idea. Go for it!

Thanks for the reminder that I could take layers out that are "doing nothing"1 it makes hand quilting so much more manageable, but my brain doesn't easily remember that "trick".

I love the idea of doing more free piecing. I really enjoyed the stuff I've done, but like so many others, there are simply more projects then I have time for. Free piecing often goes by the wayside for me as I was very wasteful with the fabric and had lots of bits to throw...

That's a great lamp post! If I were really an artist, I'd be trying to figure out how to put him on something or other.

Amazing street lamps!!! Looks more like a museum piece that should be behind glass! Is there much vandalism such as graffiti there?

You made a wise decision staying in. It was far too hot here to do anything. This weather is bizarre. One minute chucking it down and the next in the 30's and the humidity makes me feel ill!

I can't imagine trying to push a needle through those layers AND the batting AND the backing - poor fingers!

I'm glad a "great" like you doesn't like to handquilt through an extra layer. Makes me feel better. I wish I had thought to cut away under my airplanes before I sandwiched the quilt. I will remember this for next quilt, though!