Ready for some inspiration? I recently discovered the book Pheromone by artist Christopher Marley. These colors and patterns are amazing. 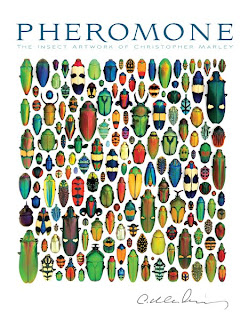 I love the color and the progression. 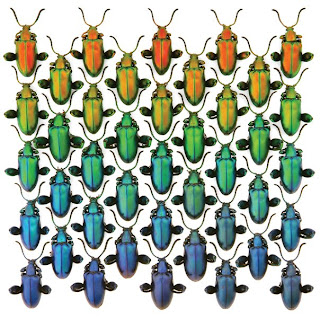 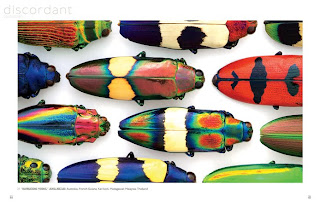 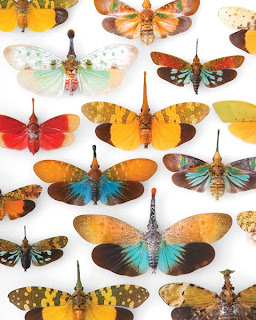 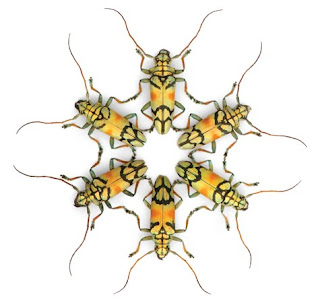 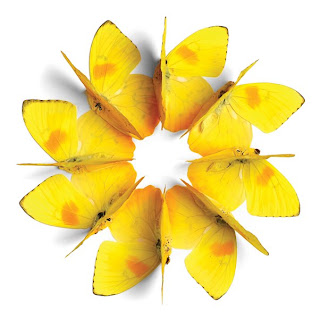 I want one of his shadow boxes, but that's a bit out of my price range. The book would be awesome though.
Christopher Marley uses actual bugs, no colors added. You can watch a video about the artist and his work here. It made me feel better about his collecting all these creatures - at first I just kept imagining the destruction, but he's saving their habitat and I guess as long as no one gets too greedy, that should be okay.
It's the beetly things at the top that really inspire me. The glowing colors. I'm already trying to figure out how to free-piece them. (I know, I know, like I need another project on the to-do list.)
The last couple of photos reminded me of Baltimore-style applique quilts that I've seen and loved: Bed Bugs by Suzanne Marshall (a fellow no-hoop hand-quilter) and Detour by Nancy S. Brown. Even if you don't want to see bug quilts, go check out those pages for beautiful quilts. Nancy does wonderful quilts of cats, dogs, and other animals too.
Completely switching topics now to tv.
Have you been watching Better Off Ted? I hope so. Fabulously funny show that I'm afraid is doomed on ABC. I'm hoping that desperate NBC will pick it up, because it so deserves to continue. It's a comedy about the people who work for Veridian Dynamics, which rather horribly makes weapons systems as well as seemingly harmless scientific advancements and food products. You don't need much set up for this clip - Phil the Scientist is terrified of Veronica, the boss's boss:

Whee, Project Runway is back. I'm loving Anthony for his bubbly personality and the fabric that he chose (black with flowers) although the dress he made was pretty ugly. As were some of the other garments. geeze.
Meanwhile I managed to get sucked into Launch My Line. I find the hosts annoying but at least they're offering some constructive feedback. I like the dynamic of having a professional paired with the dreamer and that everything they make really has to fit the latter's overall concept and the fabric that they started out with. A bit unfair though for the guy who's got wooly fabrics trying to do beachwear.
Okay, I do watch some reality tv but my heart is in real shows with actual characters. Woohoo, Fringe is back. Okay, that dreadful episode from last season should never have been aired and okay this recent one wasn't great shakes, but I still love the show. They've made it more accessible this season (perhaps too much so) and dropped a lot of the backstory about The Pattern and the other side so you can definitely jump on in and start watching. Great characters investigating weirdness - wonderful, try it.
I tried "Demons" on BBC America. Dreadful. A young man discovers he's descended from the original Van Helsing and must destroy the vampires and monsters of the world. It wants to be Buffy the Vampire Slayer. But without the humor or charismatic actors and WITH a fake American accent by their Rupert that just grates on my nerves.
I can't stand "Being Human" either. All these supernatural beings proving just how human they are by whining. bleck.
What I CAN wholeheartedly recommend is Fido, a movie about a boy and his zombie. It's actually a very sweet movie about growing up and love and acceptance. You get Timmy saved not by Lassie but the servant zombie. On a horror scale it's pretty mild. And the makers did a really good job of constructing this world so that it was believable.
As compared to the book "Pride and Prejudice and Zombies" which was a lot of fun but really fell apart if you examined it. Seriously, the problem with the "dreadfuls" has been going on long enough that even women are trained ninjas and yet it's still unfashionable to go about armed? Sorry, don't buy it. Would have been much more believable had the zombie menace only just started.
Alright, I have to stop looking for the Veridian Dynamics commercial about the dead being brought back to life (or something along those lines) and get some actual work done. Ya'all take care.
Posted by Tonya Ricucci at 9:26 AM

Oh thank goodness you pointed me to Suzanne Marshall's site because her quilts are the first thing that popped into my mind when I saw those beetles. I remember seeing her quilts in magazines and just being amazed at her creativity. They still hold up today as being just mind boggling!
It doesn't surprise me we have so many quilts in progress because when inspirations strikes sometimes you just have to run with it!

(Dementieva beat S. Williams at the Medibank International ( warm up to the Australia) Do you think this could be her year to win the
first slam of the year?)

Very cool pictures. I am not familiar with Christopher Marley but I love what he does with colors. I got my copy of LQ II yesterday and guess what I saw on page 123? Free pieced letters by Tonya!! Very impressive.

Donnelly said...
This comment has been removed by the author.
2:36 PM

The insect art is truly amazing. Thanks for sharing it with us! "Fringe" is also one of my favorite shows, my hubby will remind me to watch it, if I haven't mentioned that it is on.
Have a great day!

I have just "discovered" your blog and am enjoying myself immensely! I am a quilter that must have the tv going in the background...music won't do,books on tape won't do...so your blog is just up my alley!
Thanks for sharing your pics of gorgeous quilts,cute cats and opinions on the best and worst of tv!-Throw in a few references to chocolately sweets and you'll have a friend for life!
Tricia
Tricia

What fantastic colors. I have to check at my library to see if they is a copy! Thanks for sharing - Hugs Nat

what wonderful inspiration! (i'm into launch my line too...though i am SO glad project runway is back!!)

I just discovered Better Off Ted about a month ago; it is brilliant and fabulous, which, naturally, can only mean its imminent demise.

True inspiration. I'm not really keen on bug quilts, but I love the colours which is what it is about yes?

I've just put the Amish book in my basket on Amazon. It's not available under the end of next month.

I totally agree that the Launch my Line hosts are totally annoying. I don't even like the show much but I "have" to watch reality fashion shows.

It's amazing where we can get inspiration! Thanks for sharing this photos, amazing!

Your cat's eyes are so brilliant blue. It looks like they keep you good company as you quilt. :)

Check out pheromonegallery.com to see more of Christopher Marley's work! Truely amazing and one of a kind!