I have actual quilting content in this post - about time you might say. That will be followed by a section on Pokey and the third act will be tv viewing, so you can skip around as you like.
First off, look at the wonderful blocks that Kimberly M sent me. They are all marvelous. 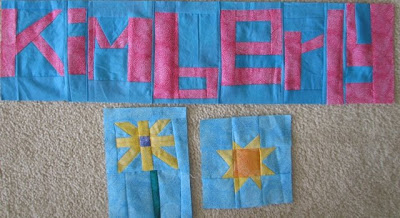 Next, I wanted to show you how I'm quilting the Margarita Quilt. I'm going in straight lines. Well, sorta straight - the lines go from one corner diagonally across the patch and then I skip to the next patch since a lot of them aren't lined up.
After hearing Bonnie rave about her Hera marker I decided to give it a try. I love it. You just press down and that makes the mark - there is no ink or chalk on the quilt. 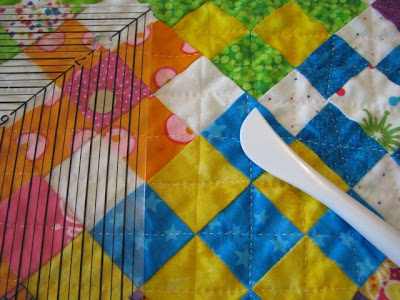 A close-up of an area that's been quilted. No, none of my lines are truly straight, not even in the patches, and that's okay with me. Actually, they don't look that bad in the photo - it's when I'm close up and working on them that I really notice it. 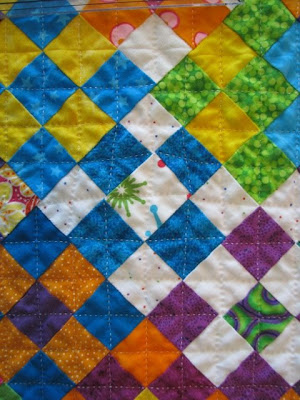 So on Monday and Tuesday I taught a class on Wonky Houses and free-pieced letters. My students were great and put up with me even though I was rather rough. I threw them into the deep end and they made some great blocks. I was so focused on "what have I forgotten to tell them" that I didn't take any photos. I'd think of it, but then say, I'll do that later. D'oh.
Okay, no pics of my student's houses, but here are a couple of really fun quilts that Sarah made, including houses.
I did make some friends though - that's the best part of all. Yesterday I actually had a quilting play date - woohoo.
A gratuitous picture of my baby Pokey (and Habibi in the cat tree). 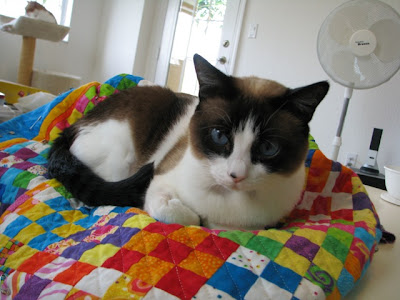 The only way you'd know all the trauma she's been through is by her punk rock hairdo. I've had a mental checklist of her normal activities that I've checked off as she's done them: begging for treats, sitting in a box, chewing on a box, chewing on random paper, scaling the tall cat tree, hunting socks... The only thing I haven't seen her do is jump way high onto a countertop.
The best thing is that she and Lily are being sweet again. A week before Pokey got sick, they had just started sitting together and mutually grooming after the trauma of the move from Paris.
So all is right with Pokey's world except for the enormous capsules I shove down her throat twice a day. She runs and hides now from me in the morning - heartbreaking. I tried the Pill Pockets, but they were so large that Pokey couldn't even eat a whole one without the pill in it.
On to tv viewing. I'm embarrassed to admit it, but my favorite show on tv right now is Hell's Kitchen. I've thought for a couple of weeks now that the winner is either going to be Danny or Paula - they are the most consistent chefs. No meltdowns, no time outs for Chef to yell at them... I'm rooting for Paula, but Danny deserves it to.
I finished the too short Lost season 4. Loving the flash forwards and looking forward to season 5 getting to DVD. I'm actually waiting for lots of shows to come out on DVD so that I can finally be caught up and watch them live next year. I'm just hoping that will include Chuck (please, NBC, please renew it) and Terminator: Sarah Connor Chronicles although I'm afraid that one is a goner.
Dollhouse has significantly improved. This last episode where the dead woman got to come back - that actually made real sense to me of why the Dollhouse would exist - rich people regaining youth and vigor. I don't love this show like I've loved Joss' other series. It's a B. I won't cry if it doesn't get renewed.
Man, Pokey just came over and nipped at me for attention - it's been ages since that happened. I am outta here - gotta go play with my baby.
Posted by Tonya Ricucci at 7:24 AM

What is a Hera marker? Is it like a paper scorer or bone folder? does it leave a crease in the quilt? I might try that with my paper scorer, altho for some reason, I don't have any handquilting right now.

I agree with you about "Doll House" I just don't get it. I haven't watched a whole lot of it because I just didn't like it. Firefly was much, much better.
Have you caught an episode of "Castle" It has the lead from Firefly in it. He is a murder mystery writer and hooks up with a police detective to solve crimes. He has the same type of witty and quirky word play from Firefly.
We have watched a few episodes and are now hooked.
Glad Pokey is feeling better.
Jo

I love the Hera marker I'm going to have to try it. I'm glad to see that Pokey is feeling better.Enjoy her and your other cats.

Awwe, Pokey is such a sweet kiddie. Is there a way to just break the pill in half or thirds and push it into some great food treat she loves? I love your margahrita quilt. It's looking good. :o)

I'm so anxious to see you put together the names!!! What fun and fab thing you'll do with them!!!

So glad Pokey is being Pokey again!

I used a Hera a long time ago...maybe I should give it another shot.

I'm so happy that Pokey is feeling better! I'm also jealous that I can't take a class from you, Seattle is pretty far from FL!
Cheers,
Dionne

Now that I have a name for it, I'll look for a Hera marker. I've marked this way for years using a blunt large tapestry or knitting needle but I think this would be easier to handle.

I got one of those markers last fall and I love it. I saw it on someone's blog. I use it for finger pressing seams before I iron. I am not doing much sewing lately and I miss it. I have to get back.

Catching up with you! So happy Pokey is doing so much better....and I love the quilting you are doing,and hearing about your class,etc!

I'm driving to Jacksonville on Thurs...I shall call you from "the road" :cD

I wish we were getting together,but it's okay that it just didn't happen this time......

glad to see that miss pokey is feeling better. your hand quilting is really making me want to hand quilt something..right this second!!! but i have nothing ready!

I had never even heard of a Hera marker. It looks like it works really well, though.

"Sorta straight" lines seems appropriate for a quilt named after a cocktail! (laughing...okay, I know that was bad! I can be a little warped, sometimes.)The quilt is beautiful and I look forward to all the pics of its progress that you post.

wait until you see season 5 of LOST! That's all I'm going to say!

Glad Pokey is doing much better, and I think the punk hair is kind of cute! With a face as adorable as Pokey's, she can get away with it!

Those hera markers are good. I'm glad Pokey nipped at you :-) ! Dear Pokey, you're better.

Love the names, LOVE the good news about Pokey.

Great news about Pokey! Your quilt colors are beautiful. Enjoy the kitties & give Poke a pat from me.

Lovely to see Pokey has recovered so quickly.

The Hera marer looks like a really good idea.

Pokey is just so beautiful-glad she's back to normal again.
Hell's Kitchen has always been a favorite of mine. This season I will have to get on dvd since it's up against CSI and I don't have TIVO. Have you seen Kitchen Nightmares? That one is pretty good as well but has a huge "Gross Factor" Dirty kitchens and icky people.

Glad to hear your baby is doing better. Have you considered halving or quartering the pill and wrapping it in liverwurst? That's what I do for Bonnie Girl.