This is another blast from the past. I took these photos while wandering through Amsterdam with my friend Will back in December. She was always such a good sport, waiting while I took seemingly endless amounts of photos.

I loved this fruit and vegetable display set up in front of a little grocery store. I get such inspiration from the colors and shapes, though I have to admit if I were making a quilt out of this, I'd leave out the avocado. Or at least make them unripe so they aren't such a dark blot in the upper right corner. 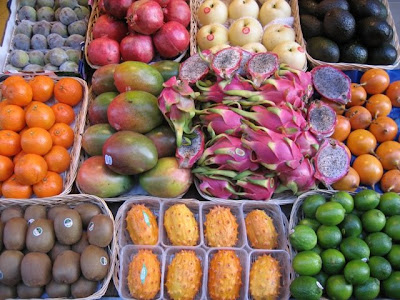 Pitaya, one of the most gorgeous fruits ever. I've never actually eaten one though. 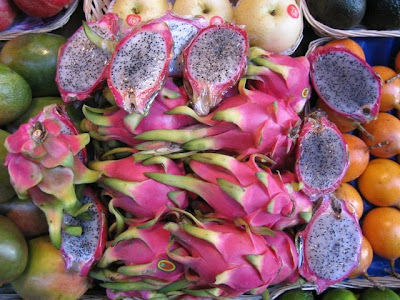 Kiwano. I only know what these are because of the stickers. 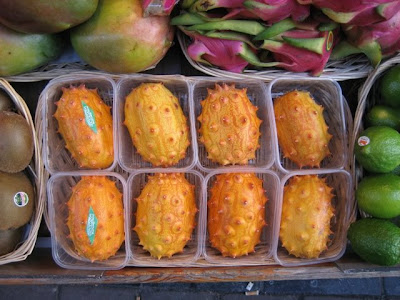 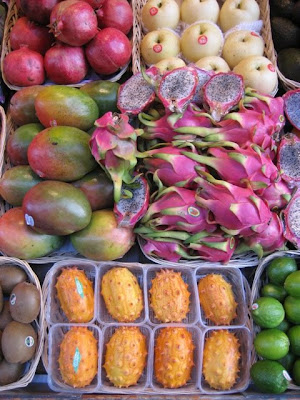 This is so my color palette right now. The only thing missing is lemons. 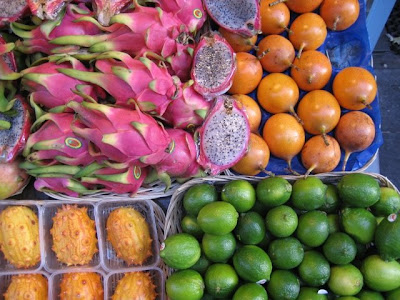 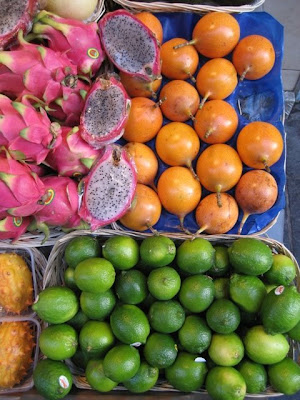 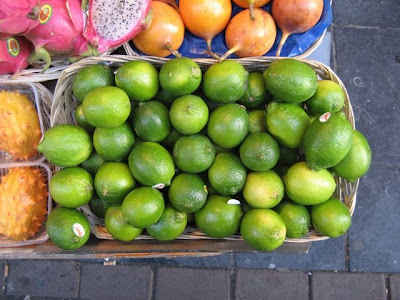 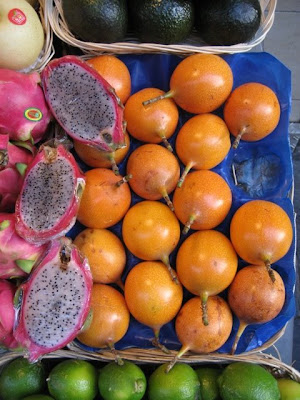 Well, Castle was disappointing last night. I hope they don't keep pushing the romantic angle between Castle and the cop, because there was just no chemistry there. I did like the poker game though - that was fun.

I keep watching Medium even though it's so predictable. C'mon, I don't have psychic powers OR real detective skills, but I figured this out - again - way before any of the tv characters. sigh. I also hate how inconsistent it is with Alison's powers. What, now she tells Ariel they can't read anything about those close to them? Since when? She used to know everything and couldn't be surprised by parties. And first she can't go into a hospital without an iPod to try and block all the ghosts harassing her and in later episodes she can spend hours at the hospital and she doesn't see a single one? I know, turn off brain to watch....
Posted by Tonya Ricucci at 9:05 AM

I hate it when tv shows become too predictable-it usually means the end of watching them for me. Medium has been on the cusp a while for me, as have a few others. I agree with you on staying true to those type of details. It will be fun to see you capture your color inspiration into your piecing.

I love your fruit pics and colors.

I love Medium, but admit that I'm not caught up on this season. I don't like the inconsistencies either. Isn't it the Ghost Whisperer that can't go in the hospitals because of the ghost? Was Medium the same way? LOL I know that I have to turn off my brain to watch - and can't let my DH watch with me because of his comments.

note to self: take camera to grocery store for color combination inspiration.

Thanks for the beautiful fruit.

Great photos! I like the color combo, unusual lime green, orange royal blue and salmon... could be good! Can't wait to see what it inspires! Missed that show. oh well doesn't sound like I missed much...

wow, just love the color combo's in the pictures...
ah yes spring must be around the corner!
I am looking forward to seeing flowers in these colors ASAP!
will be watching to see if any of your quilts are inspired by these colors :_
Kathie

yummy colours all around. very inspiring and appetizing.

Beautiful colors. Those Pitaya (pink skinned ones) are called Dragon Fruit in China and are absolutely delicious! You should have tried one!

As long as we are trashing TV shows, let me tell you that Miami CSIs do not drive black Hummers not do they carry guns.

I'm so disappointed because I missed the opening episode of Castle. As for Medium - I watch it for entertainment, and because it's one of those TV shows where the characters look like normal people (not unlike the British TV series) - not always done up like models.

I'm just so taken by this idea that you can go back in time to some old pictures and find your current favorite colors and palette. Almost like they were there incubating all this time. I also like that they were taken at the farmer's market -- inspiration straight from nature! The best kind.

These colors are JUST GORGEOUS!! You have the best eye for making art out of ordinary every day things that most of us pass by without a second glance. And...I think the avacado color makes all the others look that much more intense. You have to have a bit of darkness to appreciate the color of the bright ones!

I second Joyce's comment -- pitaya, AKA dragon fruit, is quite tasty. Not unlike a kiwi, but maybe a bit mellower. Some have amazing purple insides!

I love the fruit inspiration. I did the same thing when we were in Peru. The local markets were full of color and I took lots of pictures. They are wonderful.

The photos are beautiful. I really love the colors. I had to stop watching Medium, it just started driving me crazy. It's like changing the laws of gravity every time it's required for a plot line. Oh well, it's american television.
Cheers,
Dionne

What pretty colors! Wonder what they would think if I brought my camera into Publix? Watched a new show this week - Saving Grace. Definitely will watch it again. Sort of an edgier version of the closer...think the closer lead female detective with tats, a beat-up Porsche, a messy house and a cigar...so what is not to like!

I can see how much you love color by looking at the pictures you take and colors you use! I'll have to keep my eye out for such a feast. I don't think Japan is a colorful all around...

Willing suspension of disbelief. Sometimes it's the only thing that makes watching TV enjoyable.

simply wonderful photos! =(^_^)= you could even make the avocados sliced in half for the quilt and then you'd get that lovely avocado light green color!

What gorgeous clear photos. Somehow my grocery produce section does not look like that. Oh dear, people have been talking about good TV shows these past few days, like Castle, and I don't know anything about them. I can't even remember what the other one is. Another one about a psychic? Or is that what Castle is? I am hopeless :-).

That first picture would make a wonderful quilt, color blocks and all. Gorgeous!

Hey sweetie! Oh my gosh! Those bins of fruits are just to die for! Oh it makes me want to make a quilt of just the bins of fruits! Hop over to my blog today - look what came in the mail for me!!!!!

Love all the colours in the fruit including the Avocados, these bring the picture depth and contrast.

What yummy colors from your market photos. I love your letter quilts. Weren't you living in Paris?. I haven't checked your blog in a while.

I love the fruit Photos! I agree with Kristin L.-- You should try the dragonfruit (Pitaya) it is very sweet and quite nice to eat. :) They are such an interesting fruit, and aptly named.